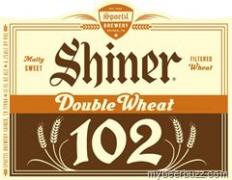 by Jacob
For their 102nd Anniversary, Spoetzel Brewery in Shiner, Texas has released a special anniversary beer.  Being a sucker for Shiner Bock and Shiner Hefeweizen, I decided to buy some from my local Shopper’s Food Warehouse.
The Shiner Double Wheat 102 is described by the brewery as “a special recipe that sits between a bright wheat beer and a wheat wine ale.”  It smells like a wheat beer and drinks more like a lager, while retaining some of the classic fruitiness associated with Belgian style white ales.  Overall this is a very easy drinking beer that would be excellent once the weather starts to get warmer (but is also great to drink now). 6.2%, $6.49/six pack (Rating ****)