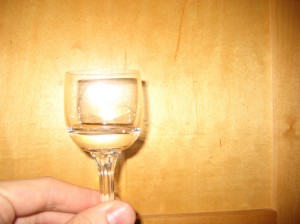 We started with two full bottles (fifths) of fresh off the still Wasmund’s Single Barley Whiskey.  This 124 proof spirit was, as the picture shows, clear as water.

Then we popped it into a little cask that was charred on the inside, and began to let it age.

We faced two immediate challenges during the aging process.  First, we had to devise  a way to reduce evaporation.  We had read elsewhere of folks having 50% of their whiskey disappear, so we tried to counteract this by keeping the whiskey barrel in a humid room (our small bathroom), and by keeping a damp washcloth on the cask.  We’d hoped this would help keep the barrels’ stave swollen tight, thereby reducing evaporation.  Our efforts worked insofar as we never sprung as leaks—except for a few drops the second or third day. 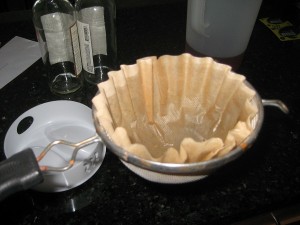 The other immediate challenge was that when we tried to draw off whiskey to sample, it would not come out of the spigot unless we rocked the cask. What was impeding the flow?  Beats us, but we never could resolve that issue.

At the end of our experiment, we had to devise a clever means to draw the whiskey out.  So we took a plastic pitcher, and placed a small strainer atop it lined with a coffee filter. We wanted to catch any flecks of barrel char.  We then pulled the bung from the cask and dumped it slowly through the strainer.

After that, we then slowly poured the pitcher into one of the bottles that the spirit had come in.  Wow.  The whiskey now had a deep red brown color that was magnificent to behold. 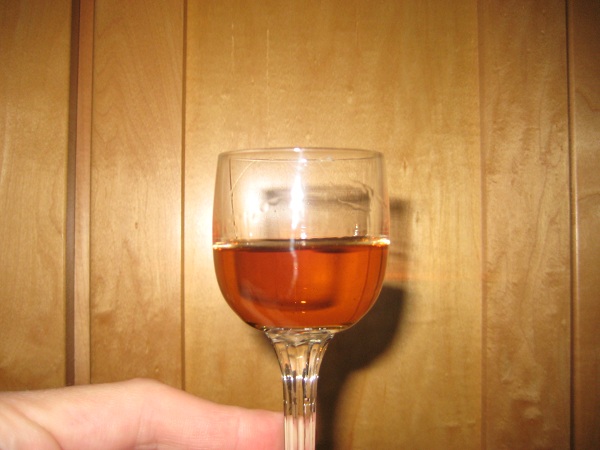 We were bummed to see that a little over 50% of the spirit had evaporated—so much for our humid room and wet washcloth scheme!  (The wet wash cloth also corroded the barrel and encouraged a black mold to grow on the cask’s exterior.  See the picture here.) 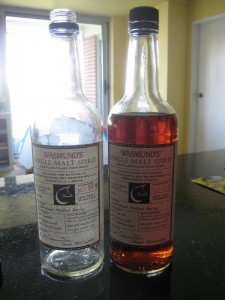 But, we didn’t despair, for the spirit that remained was very potent.  In fact, our entire kitchen smelled boozy, and we felt a little loopy from the fumes.  We pondered leaving the spirit in bottle cask strength, and then taking it with water and ice later, but we really wanted to see how much whiskey we had produced from the original two bottles.

So we split the whiskey evenly between two bottles, and slowly began adding water and taking sniffs.  Enough?  No, it still is too strong.  A bit more, sniff, a bit more, sniff… Ultimately we hit a sweet spot at the top of the bottle label.  The result then is that we got about 1.6 bottles of aged spirit at a drinkable proof from 2 bottles of pure white whiskey.

Was it worth the $100 we spent on the Age Your Own Whiskey kit?  Absolutely.  We came away with two very drinkable bottles of whiskey—no small thing.  We also gained an even deeper appreciation for the power of barrel aging.  It really does transform pure spirit. 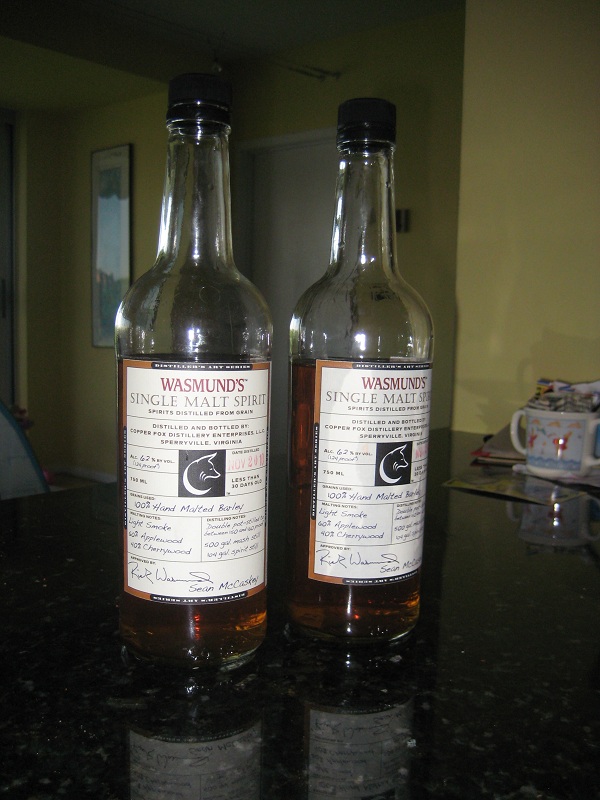 The experiment also demonstrated to us how tricky it can be to determine just when the whiskey is ready to be taken from the cask.  You leave it and it improves, you leave it and it improves, but then you have to stop the aging before you hit the point of negative return.  The first time around, that’s not easy.  We were conservative—we could have let it go a bit longer, but we did not want to risk making hash of our whiskey.

Enough writing—time to drink the whiskey!  With a couple of ice cubes, it is very pleasant.  It offers caramel and barrel flavors, and faint vanilla and honeysuckle notes.  It reminds us a little of Bruichladdich Rocks, believe it or not, though it is not as complex.  (Rating ***)  The Bruichladdich reference is not whimsy—both our Wasmund’s and Bruichladdich Rocks are single malt, unpeated barley whiskeys made in copper pots.  Not bad for our first cut at whiskey aging!