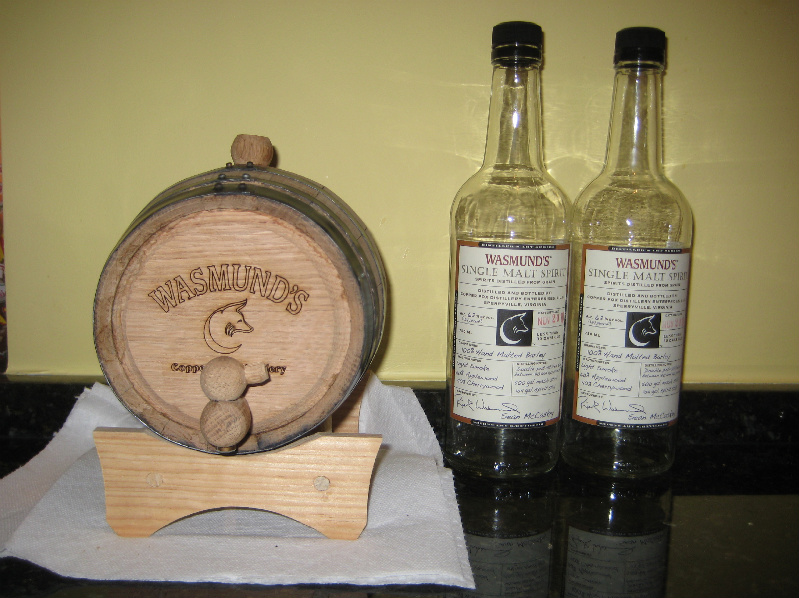 We have crowed before over this fun product—the Wasmund’s Age-It-Yourself Whiskey kit.

Now, we’re giving it a whirl.  We’ll update this little diary as the whiskey ages.  Speaking of which…

First, we filled the cask with water.  For the first few hours, the cask leaked.  (That’s normal for a bone dry barrel.)  Once the wood swelled, the drips stopped. The instruction sheet recommended letting the water sit in cask for a few hours, but we let it sit for a two full days.  We want this cask to be swelled tight so as to reduce evaporation.  (We’ve heard some folks complain of having half their whiskey evaporate.)

We fashioned a funnel by snipping the end of a Ziplock freezer bag, and then slowly poured the two 750 ml bottles of  spirit into the bag.  It flowed swiftly into the cask with not a single drop spilled.  We tucked the cask in the bathroom, which isn’t ideal, but it is the most humid room in the apartment, and put a damp wash cloth on it. The bottles were recapped and stowed in the cupboard (we’ll be filling them with whiskey one day.)

The whiskey we got was distilled on November 20, 2010, and it is made from 100% hand-milled barley.  As the below photograph tries to show—it is as clear as water.  But, at 124 proof, it is intense.  It isn’t fiery hot; it is just so austere. There’s a little barley sweetness; mostly, though, there is a slightly unsettling and menacing alcohol smell that says, “Consume at your own risk!”  A couple small sips are enough. 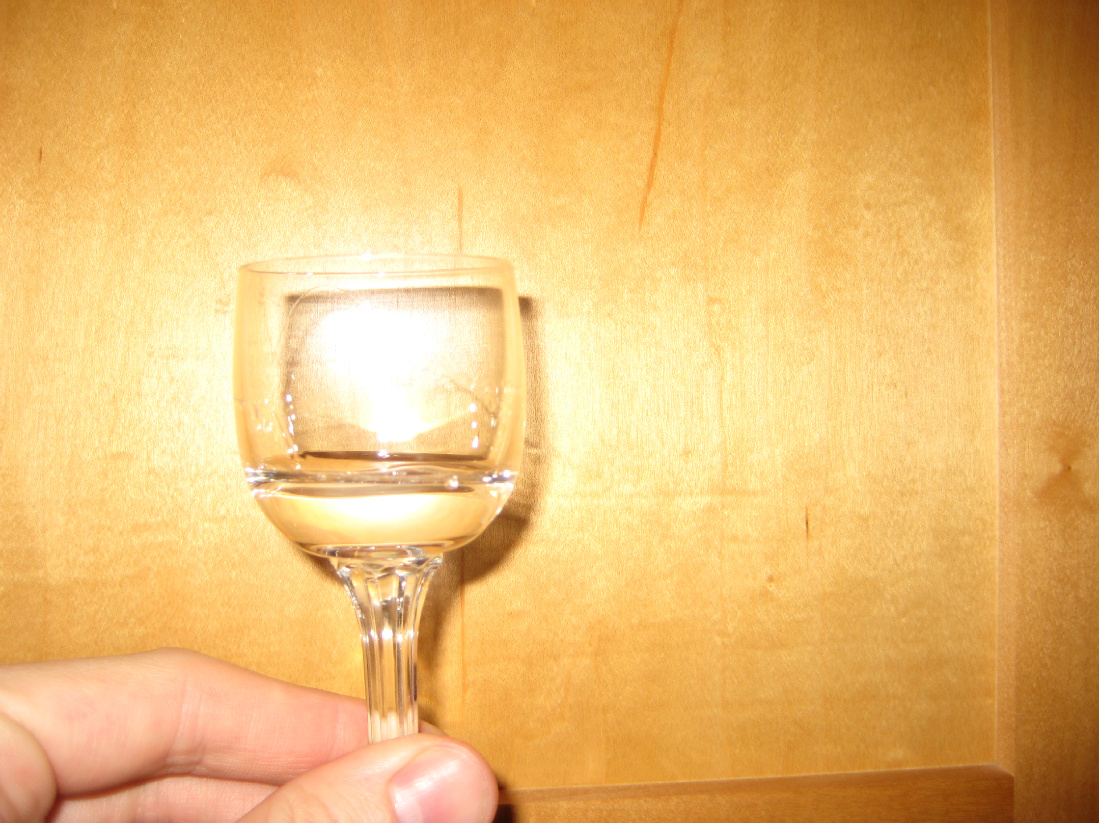 We gave the cask two quarter tilts over the course of the week.  Leaving a damp washcloth on the barrel had produced a little bit of corrosion on the hoops.  With anticipation, we turned the tap.  Nothing.  Huh?  We tilted the cask forward a touch and spirit trickled out.  (We can only guess what’s going on in the cask to cause this!)  The whiskey showed a faint straw color after just one week.  The nose and flavor remained the same.

A little more than a week has passed since our last sampling.  We gave the cask a couple more tilts since the previous entry, and kept re-wetting the wash cloth.  When we turned the tap—whoosh, out flowed the spirit, twice as dark as it was before.  It has tiny flecks of barrel char in it.  The whiskey is straw-colored, and still quite boozy, but it is definitely softening.  You can sip it and get some mouthfeel, whereas previously it just parched the tongue and throat.

One more week has clearly deepened the color—wow, it really is starting to look like what we call whiskey!  It is still too intense to sip straight up.  Mixing one measure of the Wasmund’s with one measure of cool water produced a very interesting effect—the whiskey became palatable.  A butterscotch note became discernible.  We’ll be curious to see where this leads! 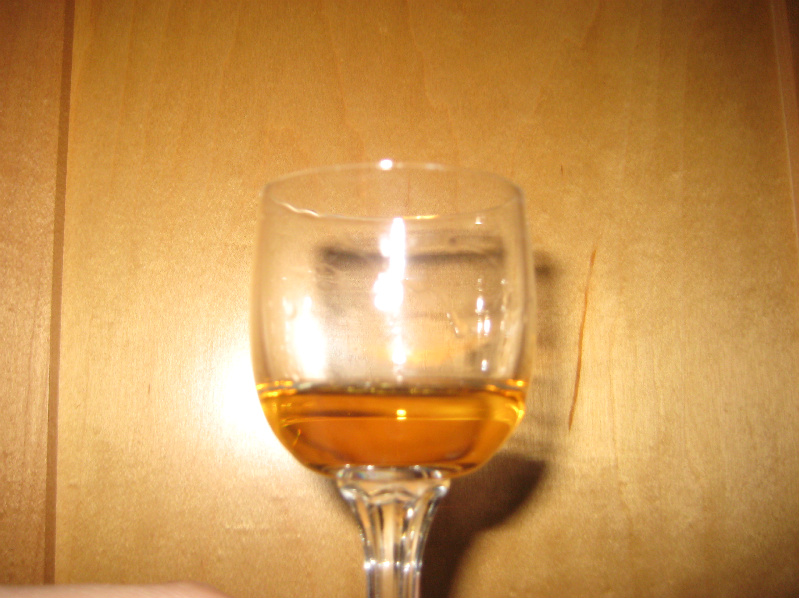 Wow, what a change.  The whiskey remains boozy to the nose, but the color has darkened a bit more, and you can actually sip it without water. The butterscotch note dominates, with barley and wood playing distant second fiddles.  It is an impressive transformation in a little less than five weeks.

The experiment has run eight weeks now, and the results are increasingly impressive.  The color of the whiskey is about the same as in the above photograph.  However, the flavor is much better.  We can sip it straight without feeling like our mouths are drying out.  It slides down the throat without burning.  Add a few drops of water to  a ounce sample and the caramel and butterscotch notes really bloom.  And something new has appeared—a toffee note.   Hopefully, the complexity and depth will continue to grow in the next month.

We are 11 weeks into the age-our-own whiskey experiment.  As the photo below shows, the color has darkened further.  We had a bit or trouble getting the whiskey out the spout—rocking the cask to and fro got spats of whiskey out of the barrel.  Perhaps barrel char is clogging the wee spout?  Anyhoo, the butterscotch note remains potent, though there now is a slightly toasty scent. 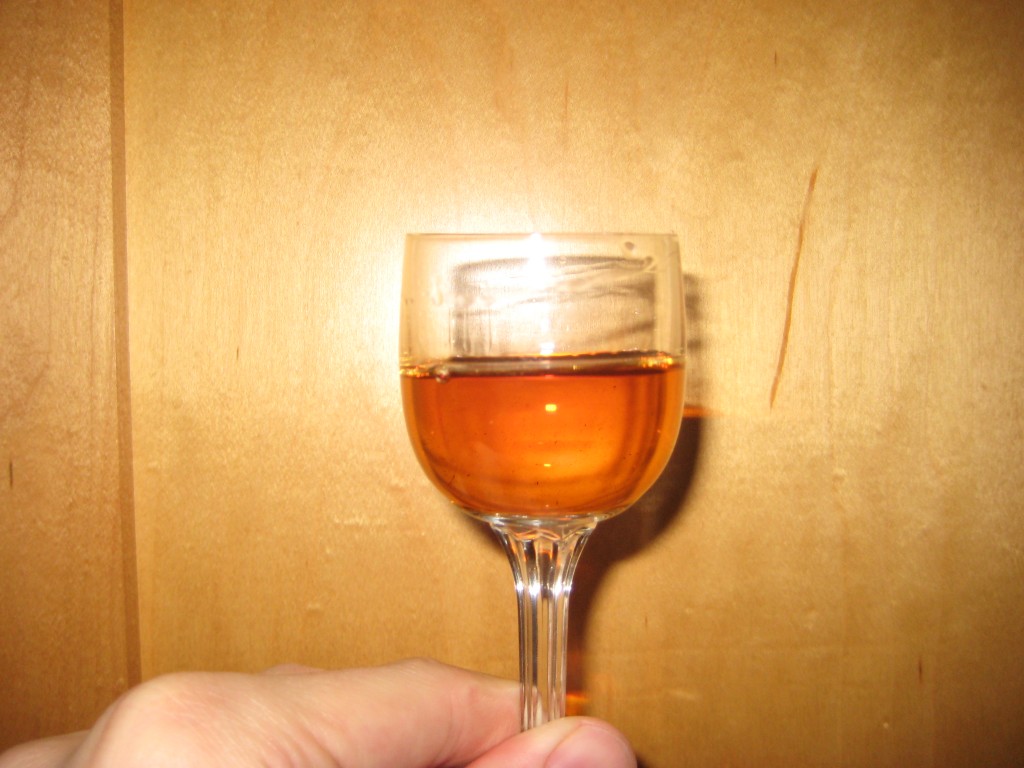 Taking a sip our eyes widen—whoa, has this stuff gotten more alcoholic?  It has less and less of that white lightning heat, but boy is it strong.  The viscosity seems higher.  With our wet washcloth wrapped around the cask, we were hoping to keep evaporation of the spirit down.  Perhaps it is working?  Adding a little water makes it much more palatable, and the viscosity holds.  We wish we were chemists and could subject this spirit to molecular level analysis—we’re perplexed as to what is going on.

(Click here to see the end of the experiment.)

2 thoughts on “Age Your Own Single Malt Whiskey Experiment”