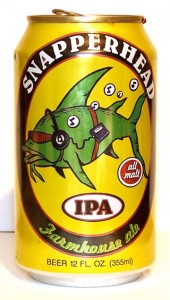 My fascination with craft canned beer continues with the Snapperhead IPA from Butternuts Beer & Ale in Garrattsville, New York.

Part of their Farmhouse Ale series, the Snapperhead is a very light amber color in the glass.  Malty up front with notes of caramel and hops on the middle and end of the palate. This 6.3% ABV brew is not an overly hopped IPA, but it does exhibit some hops in the aftertaste.  (Rating ****)

While there are a few new craft brewers in New Orleans (Bayou Teche and NOLA Brewing Company), when most people think of New Orleans or Louisiana beer, they think of Abita.  Brewed on the other side of Lake Pontchartrain from New Orleans in Abita Springs, LA, Abita makes a number of excellent beers including Abita Amber, Turbodog, and Purple Haze.

Shortly after the Gulf of Mexico oil spill last year, Abita created a specialty beer to raise money for Gulf cleanup efforts called Save Our Shores. For each bottle they sell, 75 cents is donated “to the rescue and restoration of the environment, industry and individuals fighting to survive this disastrous oil spill.”

Sold in a 650ml bottle, Save Our Shores is an unfiltered Weizen Pils.  A hazy golden color in the glass, SOS has a clean almost citrus nose.  Brewed with plenty of hops, there are hints of lemon and spice throughout and a satisfyingly, but not overwhelming hoppy finish. $5.25 (retail in New Orleans).  (Rating ****1/2).

1 thought on “Snapperhead IPA and Abita Save Our Shores”