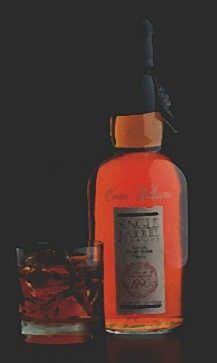 Editor’s note: We’re republishing this article from our archive as part of a reorganization of the site’s content.

O.K.- a quick lesson in bourbons. What’s the difference between a single barrel bourbon and your typical bourbon?

The latter is mixed, the former all comes from one barrel.  More clearly, many bourbons are blended—that is, as bourbon ages in barrels its flavor changes. Sometime for the better, some times for the worse.  So typically distillers take bourbons of different ages and mix them so to marry the best qualities and hopefully bury the worst.

Evan Williams Single Barrel is just that—a single bourbon that hasn’t been mixed with others. After distilling it was oak casked in 1989 and bottled just a couple years back. It is 86.6 proof and is a little more red than many bourbons.

Why wasn’t it blended? In part, because their is an increasing consumer demand for unique whiskeys—witness the huge clamor for single malt scotches. Any distiller would be a fool not to make a few single barrel whiskeys.

But the other reason is that sometimes certain batches and barrels of whiskey come out superb or wonderfully unusual; thus, it would be a gross crime to destroy this peculiarity through blending.

So we have Evan Williams 1989, named after the first fellow to have a licensed distillery in Kentucky, way back in 1783. When I tasted it next to other bourbons my first response was, “That’s something special.”  It is buttery, very creamy, supremely smooth and sweet. This is a truly lovely bourbon, and I am astonished that I was able to purchase it for about $17.00- a remarkably low sum for the quality.  If I might send a plea to the folks at Heaven Hill, who make and distribute Evan Williams: I beg you to please send me another bottle, it’s a delight. (Rating ****1/2)