The very smart Drew Long of DCFoodies.com has taken Early Times whiskey and re-aged it to remarkable effect.  After seven-and-one-half months of sitting in a new charred oak barrel, the thin, bland Early Times became deep and delicious. We were floored when we sipped it.

Inspired by Long’s example, we decided to try it for ourselves.  Could we, to put it crudely, turn shit into shinola?

On June 6, 2011 we took a small Wasmund’s charred barrel we had previously used to age barley spirit, and filled it up with Kentucky Gentleman blended whiskey.  This Barton Brands product is pretty lousy stuff—it is 51% Straight Bourbon aged four years or more, and 49% neutral grain spirits.  (As such it does not meet the legal definition of Bourbon.)  It cost us all of $13 (after tax!) for a 1.75 liter plastic bottle.  Take a sip of Thompson’s and you taste a little whiskey and a lot of alcohol. It is harsh.  Have a peek at the color and you will get a sense of the quality of this stuff. 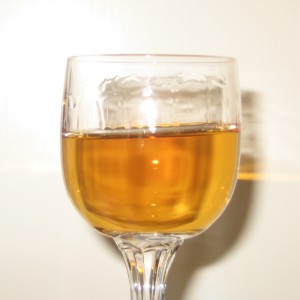 We let the Thompson’s sit until October 22, 2011—about four and one-half months.  When we popped open the bung hole and drained the barrel, we were stunned on two counts.  First, half the whiskey had evaporated—poof, a .875 liters of whiskey gone, meaning about $6 dollars and 50 cents of our investment was lost. Second, we were surprised at how much deeper the color was, and how much better the Thompson’s tasted. 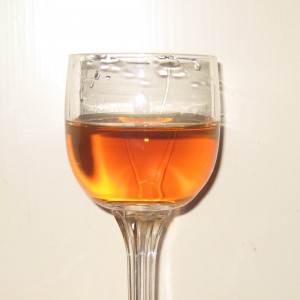 Were we served this blind, we would guess it was the product of some small, upstart distillery. We would admire the deep amber color and compliment the apricot-like note and the char flavor.  We likely would rate it ***3/4 stars out of a possible 5, which is very good.

So now we know—with $13, a barrel, and some patience you can produce the better part of a liter of tasty whiskey.