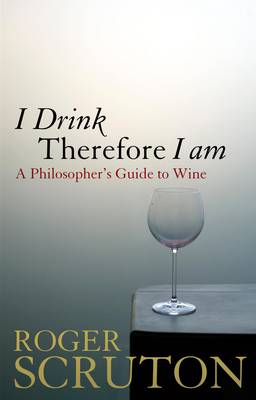 We can recommend this book only to a rare few—those with both an intense interest in wine and a healthy appetite for lengthy discussions of philosophy.

Roger Scruton is sui generis and has been forever.  It is nearly impossible for him to utter a sentence without outraging someone.  This holds true on all the subjects he has addressed during his life as a writer, educator, and social critic.

This book’s gripes over the globalization of wine, romantic exultation of local production, and denunciations of Christian and Muslim teetotalers will no doubt annoy many readers who believe that we live in is the best of all possible wine worlds.

But don’t mistake what we are saying—Scruton is no radical art provocateur who pops off solely for the sake of riling others up.   He delights in making mince of pieties but he also has his own ideas of right and wrong. (Witness his BBC series on art and its plunge into depravity.)  Ultimately, he seeks the truth in life.

I Drink Therefore I Am (New York: Continuum Books, 2009) is less a book than a series of meditation on wine and its proper role in human life.  Scruton begins with some charming remembrances of his own introduction to wine.  he then builds a case for the centrality of wine to human happiness.  He closes the book with a rather hilarious appendix of famous philosophers and what wines one ought to consume while reading them.

Regarding happiness, he observes that human beings are “full of wrath” and that “only one thing can cleanse us, namely offering and receiving forgiveness, which is a redemption from hatred and not a countervailing force” (170).   “The rule of agape,” he notes, “tells us that others come first, that we exist not to claim good things but to give them, and that pleasure is not an end in itself but a good to be harvested from the love that we sow” (165).  How to learn this rule?

Scruton advocates taking wine at a table with selected friends, as is done in Plato’s Symposium. With wine, we humans can “set love and desire at a distance that makes them discussable” (3).  Specifically, Scruton suggests:

First, surround yoruself with friends.  Then serve something that is intrinsically interesting: a wine with roots in a terroir, that reaches out to you from some favoured place, which invites discussion and explroation, and which takes attention away from your own sensations and betsows it instead on the world.  Into the aroma that rises from the glass, conure as best you can the spirit of absent things.  Share each memory, each image and each idea with the company; strive for a sincere and relaxed affection; most of all, think of the topic and forget yourself” (162).

Thus, “wine offers a glimpse of the world sub specie aeternitas, in which good things show their value, no matter who possesses them” (34).   We are one with our friends and free from the vices of wrath and envy in this state of happy intoxication.

I Drink Therefore I Am is, for certain, a provocative read.  There is much in it with which we disagree.  Most profoundly, Scruton makes the classic philosopher’s error of trying to treat topics (e.g., binge drinking) through the lens of ideas alone. (Our view: economics and other factors also affect man’s drinking habits.  E.g., without cheap gin, there wouldn’t have been a gin craze in Britain in the early 1700s.)

But saying we dispute some of Scruton’s takes is not a put-down; rather, it is in keeping with the spirit of Scruton’s work, which is to do as philosophers do—debate and discuss.  Ideally, we would do this one evening with Roger over good food and wine.  Alas, we are told he recently sold his Virginia farm and returned to England.

Click here to read more about this book or to purchase a copy.