How could we not? It has a history going back to the late 19th century. (See here)

Narragansett also has an apparently fiercely supportive local base of consumers, a bit like Yuengling does.

There also is the motto: “Made on honor. Sold on merit.” How’s that for straight shooting?

Lastly, there are the advertisements, which range from cartoonish to the raunchy (see below).

So, when we saw the local Whole Foods selling it during August, we snatched it up. “This will be great,” we thought.

Wrong. What a disappointment. No wonder Jaws’ crotchety old sea dog, Quint, was drinking this brew. It is wretched—an affront to an even faintly sentient palate. Even served bone cold Narragansett is thin and bitter—and not in a good way. We tried a can night after night, paired it with different food, and even pitched salt in it.  The same result—barely tolerable for the first half of the can, then ghastly as it warmed.

Perhaps on tap it is better. But we won’t buy any of this canned crud again. (Rating: Not good) 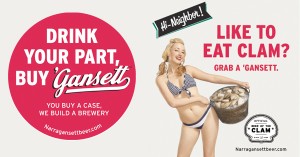