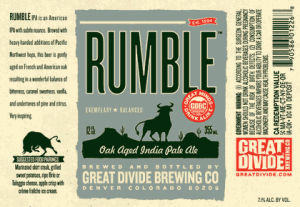 IPAs, especially West Coast IPAs, have been all the rage in the craft beer community. Because of the popularity, many breweries are looking for ways to make one (or more) of their IPAs stand out in an increasingly crowded field. Recently, I found an IPA that is different, both in how it was made and in how it tastes.

Great Divide Brewing Company’s Rumble IPA is a unique IPA that has the traditional hop flavors, but with a twist. Rumble is barrel aged.  No, you didn’t read that wrong.  Great Divide has taken a traditional IPA and aged it in French and American oak barrels.  As a result, Rumble IPA (7.1%) is a complex beer with a blend of citrus and grain flavors associated with hops and the vanilla, caramel, and wood notes associated with barrel aging. (Rating ****)
You may read more about Rumble IPA and other Great Divide brews at: http://www.GreatDivide.com/.