No to rock-hard fruitcakes. No to hideous neckties that match nothing in one’s wardrobe. No to useless contraptions like the Ronco inside-the-egg scrambler. And no to more electronic gadgets that pester and scatter the mind with pings, bleeps, and jangles.

Go for drinky gifts instead, which cannot fail to delight and provide hours of levity in these weird times of creepy willy-wavers in America and belligerent lunatics on the other side of the globe.

Thirty years ago, the best beer I could find in most groceries was Michelob or Lowenbrau. How times have changed in our grand land. These days, you can throw a rock in any direction and it has a high probability of hitting a good bottle of beer. Which makes shopping for brews easy.

Among the brands I would recommend are Germany’s Riegele bocks and Dortmunders, Montana’s Grand Teton Brewing’s gose and ales, Oregon’s Full Sail Brewing’s entire line-up (everything is great), and the big ales and stouts made by Michigan’s Bell’s Brewery, Founder’s Brewing Company, and New Holland.

You might also box up and put a bow on bottles of Guinness’ new beers, like the Antwerpen Stout or Rye Pale Ale.

Icky sweet apple ciders in 12-ounce bottles are common in U.S. grocery stores. Skip them and grab a 750 milliliter bottle of old style cider. Le Lieu Cheri’s Cidre Fermier and Cave de la Lotterie (imported by Wine Traditions Ltd) are dry, light, and decidedly earthy ciders ($10-$12). The aromas arising from these sparkling beverages are sour and mushroom-y. I served these ciders as whistle-wetters before our Thanksgiving dinner. At a mere 5 percent alcohol they can be enjoyed without getting you loopy.

Never has it been a better time to be a whiskey drinker. Newer brands like Angel’s Envy Bourbon (aged in port barrels and $50 a bottle) and the splendid Filibuster Dual Cask Bourbon (finished in French oak barrels and $40 a bottle) are among the brands that have reconceptualized the flavor profile of bourbon without abandoning its essence: sweet and fiery. Traverse City Whiskey Company’s flag ship straight bourbon whiskey (86 proof; $35) gives the tippler a sense of what the whiskey century ago must have been like: a thick with charred barrel flavor and a little hot on the swallow.

Rye, as everyone knows, has made a yuge comeback. To get a sense of old rye versus new, consider giving someone a bottle of Rittenhouse Bottled-in-Bond Rye (100 proof; $27) and a fifth of Filibuster Dual Cask Rye (90 proof; $45). The former tastes of grain, black pepper, and a little apricot. The latter is gentler, slightly sweet, and offers apple and floral notes. I love each of them. If you want to impress a rye aficionado, pony up $110 for WhistlePig 12-year old rye (86 proof).

Hands down, the best wine I tasted this year was also the priciest: Ken Deis Cabernet Sauvignon 2014 ($60 most places; $25 via NakedWines.com). This red tasted like a cross between Bordeaux and a new world fruit bomb. It was utterly succulent, and showed faint blueberry and cedar notes. I nearly wept when the bottle was empty.

If you want remarkable bang-for-the-buck, wrap up some bottles of Jose Maria da Fonseca wines (imported by Palm Bay International). These Portuguese red wines have remarkably diverse flavor profiles. Da Fonseca’s Ripanço ($12) reminds me of beauojolas nouveau. It is light bodied, floral, and only a little fruity. The Jose se Sousa 2015 ($17) is very old world—it is dry, vegetal, and shows a clove note. Meanwhile, Da Fonseca Periquita Reserva 2014 ($15) is very new world. It offers immense fruit and vanilla notes and all but screams for pairing with steak, roasted vegetables, and gooey or salty cheese. For those with deeper pockets, the $40 Domini Plus 2014 would make a welcome gift for a wine collector. This inky red wine is very fruity, tannic, and dry, and will age well. Da Fonseca, I should add, produces terrific fortified wines. The Alambre Moscatel de Setubal 2010 ($17) would appeal to those who enjoy port. It has floral and peach notes. Yum.

Speaking of fortified wines, Vignobles Constance et Terrassous, Rivesaltes Ambré Hors d’âge 6 (35 proof; $30; Regal Wine Imports) is a gorgeous amber-red dessert wine. All the delicious port-type flavors —fig, honey, etc.— are here. Serve neat at room temperature or very slightly chilled and enjoy it with your feet up and your hand near a good book and cheese tray.

Books on cocktails and more

For the person who loves to read of drink, there are abundant choices. Alexei Damon Murray and Stephen Sorrell’s Alcohol (Fuel, 2017) carries eye-popping photographs of Soviet anti-drink posters from the 1960s to 1980s. The government produced bazillions of them, but the downtrodden citizenry kept boozing. Steven Grasse’s Colonial Spirits (Abrams Image, 2017), as I previously wrote, is a wild and amusing romp through early American drink.

Robert Simonson’s A Proper Drink (Ten Speed Press, 2016) is a lengthy, deep-dive report on how America’s cocktail scene revived over the past 30 years. As someone who was in the thick of the whole New York City drink scene in the 1990s, I can attest that Simonson got much of the truth. Those of an antiquarian bent might enjoy receiving a copy of Sherry Monahan and Jane Perkins’ The Golden Elixir of the West (TwoDot, 2018). It is filled with amusing old yarns about American whiskey.

Friends and family who like to DIY can be given Emma Christensen’s Modern Cider (Ten Speed Press, 2017), a pretty tome that teaches how to make various fruit ciders, shrubs, and wines.

And those feeling charitable to the industrious hack who has written innumerable columns for your eyes, you can help feed his family and fishing habit by filling stockings with his slim tomes on whiskey and moonshine. 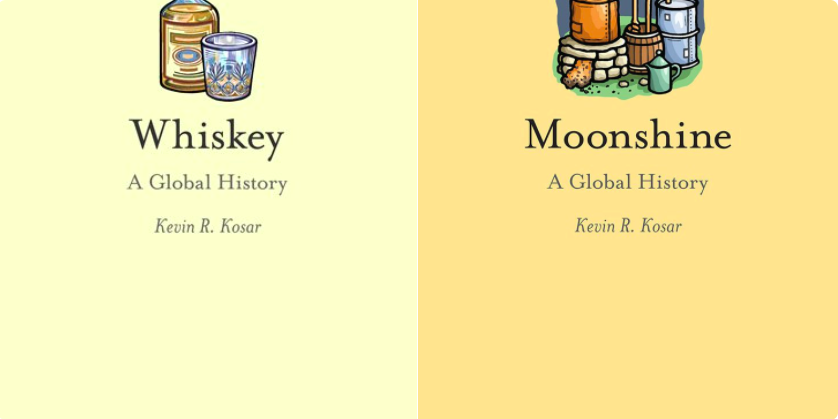