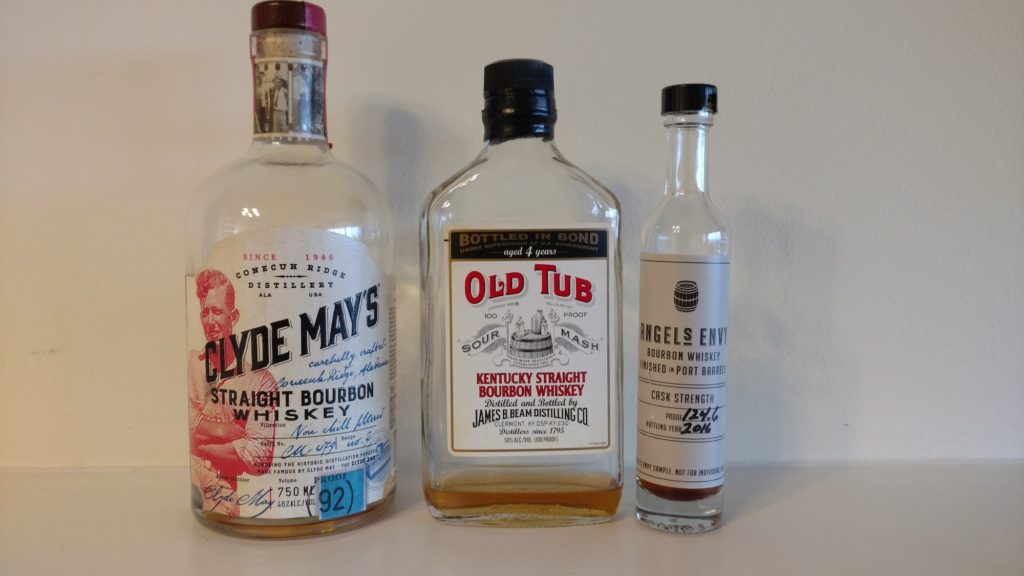 I am a seasonal drinker. What tastes best to me in the summer swelter is not what I hoist in the chillier months. Since the cold began its bite some weeks back, I have not had a single gin drink, for example, despite it being a spirit I adore.

Mostly, my glass of late has been filled with whiskeys. Bourbon tastes especially delicious during the dark months. I picked up a handsome package of Calumet Farm Kentucky Bourbon Whiskey (86 proof), which came with two nice glasses. It proved a bit of a disappointment—the flavor was thin and not very nuanced. Who exactly makes this Bourbon is far from clear—the rear label lists “Western Spirits” and “Three Springs Bottling Company.” Google those and you don’t get much. There is no Western Spirits distillery, so maybe this bourbon was bought from Heaven Hill. (Rating: Not good)

I got much more satisfaction from Clyde May Straight Bourbon Whiskey (92 proof). May, as many of you likely know, was a famed Alabama moonshiner who operated between the 1950s and 1980s. His son Kenny took the business legal, but not before running into some troubles with the law himself. Clyde May bourbon is made by Conecuh Ridge Distillery, and is aged in heavily charred barrels. It offers an intense apricot and nutmeg notes, and costs about $40 a bottle. (Rating: Very good)

A friend brought me a bottle of Old Tub sour mash, which one has a hard time finding beyond the grounds of the Jim Beam Distillery. This bottled in Bond whiskey is good stuff—a 100 proof, 4-year old spirit that tastes of corn, vanilla, barrel char, and apple. (Rating: Very good) Why is it called “Old tub”? Bourbon historian Chuck Cowdery explains:

“In 1892, Jacob’s grandson, David M. Beam, transferred the family distillery to his sons James and Park, and his son-in-law Albert Hart. They called their company Beam & Hart but gave their distillery the name of their best-selling brand, Old Tub Bourbon. As whiskey marketers are wont to do, these newly large scale commercial distillers tried to cast themselves as old-timey. Jack Beam, an uncle to Jim, Park, and Al, called his brand (and distillery) ‘Early Times’ and used terms like ‘hand made’ and ‘old fire copper’ to suggest timeless craftsmanship. His nephews’ ‘Old Tub’ was a reference to the wooden tubs in which mash was cooked, laboriously stirred by hand. Historic Old Tub labels show the mash being stirred by a dark-skinned worker, possibly a slave. The modern version just shows the tub.”

Last year, I crowed over Angel’s Envy in the Spectator. Here I will do it again. This year they released a cask strength (124.6 proof) version of their port-barrel aged bourbon. Only 8,000 bottles came to market. It is an immense drink—on must add drop after drop of water to it to find the soft spot where the flavors release. The size of this whiskey is the product of the considerable work used to produce it. Carin Moonin explains that Angel’s Envy is “made from a mash of 72 percent corn, 18 percent rye, and 10 percent malted barley. Once the bourbon has aged a minimum of four years (and up to six years) in white American Oak, it’s finished for up to six months in 60-gallon casks that were formerly used to mature port.” (Rating: Very good) Angel’s Envy cask strength runs about $180 a bottle.  Somewhere above Lincoln Henderson, the late distiller who invented this whiskey, is smiling.