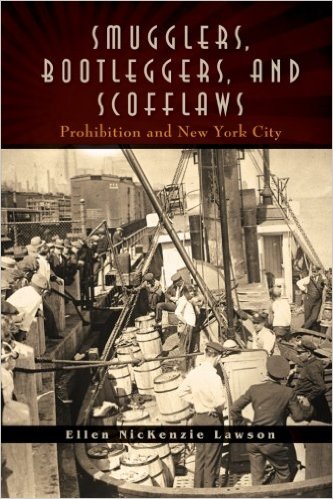 “It should not be forgotten,” writes historian Ellen NicKenzie Lawson, “that one possible derivation of the word Manhattan is the Native-American word Manahachtanienk, which translates as ‘place of general inebriation.'”

So, when politicians in Washington, DC decided to impose Prohibition on the nation, New York City became the biggest scofflaw. The town openly and brazenly disobeyed the teetotalism, as Lawson richly details in Smugglers, Bootleggers, and Scofflaws (SUNY Press, 2013).

To tell the story, Dr. Lawson worked through heaps of original records—some 90 boxes of materials held in the National Archives. She discovered some amazing things, and brings to light facts you will not find in other histories of Prohibition.

Prohibition unleashed mayhem in Manhattan, where drinking was a daily habit for many denizens. To understand why, one need only consider the basic economics of the matter. Demand for a good will not disappear by abolishing the legal market for it. Supply will simply shift from licit producers and sellers to illicit ones, who will fight among themselves for market share. The quality of the product may decline, as a firms are unable to be held unaccountable by either the government or customers.

So it was that the Big City became riven with gangs, who formed complex syndicates that trafficked smuggled and illicitly produced (and often toxic) alcoholic beverages. With 30,000 speakeasies operating and millions of bottles and kegs of drink being consumed, one can only imagine the immensity of the untaxed wealth flowing into the pockets of thugs like Big Bill Dwyer and Lucky Luciano.

You can read a digest of Lawson’s book in Prologue, a quarterly magazine published by the federal government’s National Archives and Records Administration. But to get a full picture of the utter failure of Prohibition in Manhattan, buy a copy of her book and visit Lawson’s http://smugglersbootleggersandscofflaws.com/.

View this document on Scribd