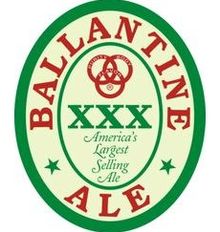 Editor’s note: We’re republishing this review from April 2003 because the old copy still gets so much reader traffic.

I first learned of Ballantine’s while reading something by Hunter S. Thompson. He seemed to like it (then again, what didn’t he drink).

At the time, I couldn’t find it: beer store guys looked at me like I was asking for some 19th century product. Now, though, it can be found with relative ease, at least in New York City. I won’t kid you: Ballantine’s XXX is a cheap beer. Yet, unlike Hollandia or numerous other thin yellow beers, it has a character all its own. Whatever hops they use (Cascade?) import a dry, sweet bouquet to what would otherwise be a very pedestrian brew. Drink it very cold, for as it warms up it loses its crispness and becomes flabby. (Rating: Good)