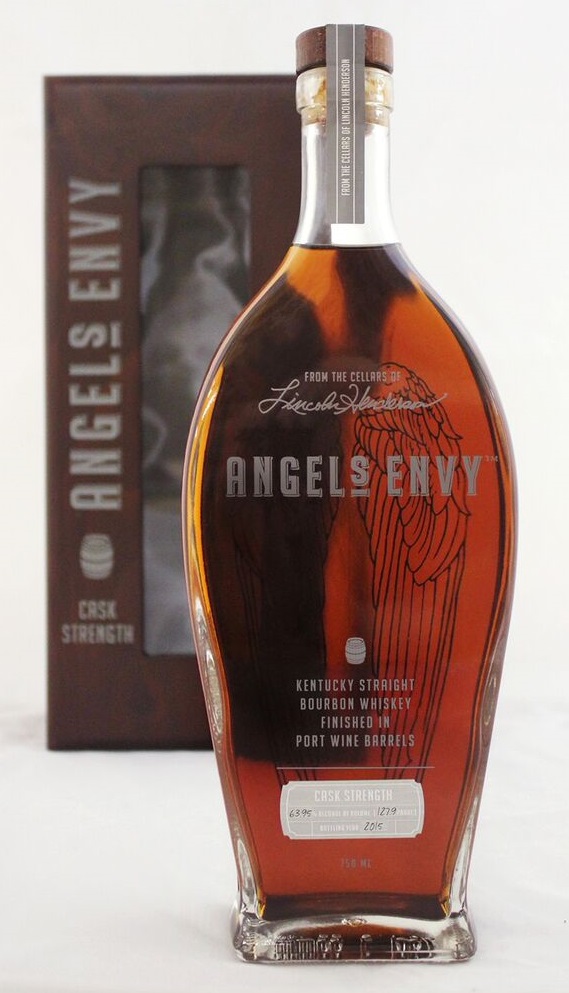 Some time in the 1990s bottles of whiskey finished in flavoring casks first landed at our door. They were Bowmore Scotch whiskies, some aged in barrels that once held Oloroso sherry, others spent time in casks that held port or Bordeaux red wine. (Use our search engine to locate our reviews of Bowmore Darkest, Dawn, Dusk, and Voyage.)

Not long afterward, Jameson 1780 Irish whiskey arrived—it too had been Oloroso cask finished.

Bourbon-makers did not take up finishing until more recently. They were content to leave their whiskeys in charred barrels the full-time. Then distiller Lincoln Henderson decided to finish fine Bourbon in port casks—thus Angel’s Envy was born.

We first tasted Angel’s Envy in 2011—and promptly pronounced it terrific. That was the 86.6 proof (43.3% ABV) version. A couple years later,  another critic declared Angels’ Envy the best booze on earth.

Here we have a monstrous incarnation of Angel’s Envy—a whopping 127.9 proof (63.95 ABV). This whiskey is amber tinted red, and is very palatable at full proof. Adding water releases various notes—honey, fig, nuts, corn… There’s a lot of there there. (Rating: Very Good)

Only 8,000 bottles were released to the world. Get one before it’s gone. You can read more at http://angelsenvy.com/, and you might be able to source a bottle with InternetWines.com.