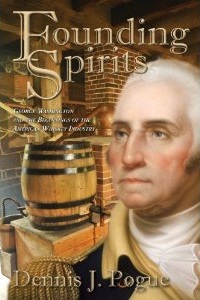 Dennis J. Pogue has written the definitive book on this topic, Founding Spirits: George Washington and the Beginnings of the American Whiskey Industry (Harbour Books, 2011). Pogue has toiled many years at  Mount Vernon, and is uniquely positioned to comment on Washington’s distillery.  We supplied a lengthy review of Pogue’s book in the June 4, 2012 issue of the Weekly Standard magazine. (See here.)

We enjoyed it, but we should note that Founding Spirits is no light read—it is an erudite, scholarly collection of essays deeply grounded in the historical record.  It describes the centrality of alcoholic beverages in 18th century life, and Washington is an exemplar of that lifestyle.  As we put it in our review:

The belief that alcoholic beverages were both safe and salubrious was commonplace. A 1764 Virginia Almanack advised taking a teacup of rum steeped with huckleberries “night and morning” to cure dropsy. Brandy was gulped to settle the nerves and to tamp down dyspepsia and fevers. Washington himself directed a friend suffering “ague” to take three or four cups of wine at midday and one in the evening.

Washington’s distillery was butilt in 1797 and very quickly became one of the biggest in America. It produced mostly rye whiskey, but also apple, peach, and persimmon brandies.  Within 15 years, it was gone—burnt to the ground. (Washington died earlier— just two years after the distillery got up and running.)

A few years ago, Washington’s distillery was rebuilt with the generous assistance of the Distilled Spirits Council of America.  The public may visit it at Mount Vernon.

We had a visit to it this spring, and it was an utter delight. It features beautiful grounds, a working gristmill, and a separate building housing the stills.  The first video we took is below.

You can find other short videos at AlcoholReviews.com’s YouTube page: http://www.youtube.com/user/AlcoholReviews1.  The videos we took (all less than a minute long) show the whiskey-making process, from milling to 165 proof spirit pouring off the still. Please enjoy these videos and do try to make your way to Alexandria, Virginia to visit Mount Vernon and see it for yourself.  It is very impressive.