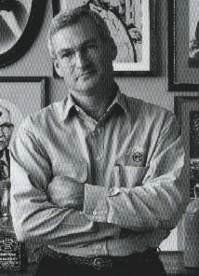 Editor’s note: We’re republishing this article from 1997 because the old copy still gets so much reader traffic. Mr. Bedford died in August 2009.

I stood alone on the sixth floor of the Marriot Marquis next to the brass keydrop. Travelers from around the world swarmed about me, checking in and out. Outside cold winds howled through Times Square. If ever there was a day to be tasting whiskey…

A week earlier an unbelievable email had popped up on my screen- an invite to have a private tasting with Jimmy Bedford, Master Distiller at Jack Daniel’s. What better way to learn about Jack Daniel’s two super premium whiskeys, Gentleman Jack and Jack Daniel’s Single Barrel Whiskey?

Out of the horde he stepped, the man whose photo I had seen so many times before. A kindly PR fellow, Clay Dye, from Dye Van Mol & Lawrence, introduced us and took us to a quiet area in an adjoining restaurant, where we sat and got the lowdown on Gentleman Jack and Jack Daniel’s Single Barrel Whiskey.

Most of AlcoholReviews.com’s readers are likely familiar with Jack Daniel’s Old No. 7 Black Labeled Whiskey. Our readers are also likely aware of the difference between Tennessee whiskey, which Jack Daniel’s is, and Bourbon. In terms of the production process, whereas Bourbon is distilled and then sent to barrel to age, Tennessee whiskey is distilled then filtered, then aged in barrels. In the case of Old No. 7, the whiskey is run through 10 feet of charcoal made from hard sugar maple before being aged in charred white oak barrels, which are, Mr. Bedford noted, used just once. 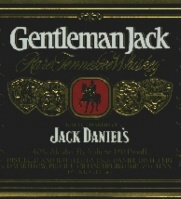 Gentleman Jack (80 proof) takes the Jack Daniel’s formula for Tennessee whiskey and incorporates and extra step- a second charcoal mellowing AFTER it has been aged. The result? Well, Old No. 7 is fair copper and has a fireball candy spiciness on the tongue, along with a nutty taste. Gentleman Jack is much smoother, much softer, exhibiting more barrel and charcoal flavors, along with faint currant and hazelnut notes. It’s quite good. (Rating****) 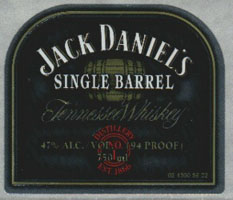 Jack Daniel’s Single Barrel is an intriguing product. Unlike Old No. 7 or Gentleman Jack, each bottle of Single Barrel comes from (you got it) a single barrel, chosen by Mr. Bedford for its excellence. So that makes the whiskey in a bottle of Old No. 7 or Gentleman Jack a blends? “No,” Mr. Bedford rightly noted, “They are intermingled whiskeys. Blends usually are whiskeys that are made from the products of many distilleries. We don’t do that. Our No. 7 and Gentleman Jack are made only from Jack Daniel’s whiskeys, intermingled to create a consistent taste and quality.”

The Single Barrel (94 proof) that I sampled was much darker than the other JD whiskeys. Six to seven year in the barrel left it a deep copper-red color. In the mouth it was much more intense, and far fuller in flavor. The grain, caramel, vanilla and charcoal flavors were wonderfully balanced, and it was clearly the best of the the three. Bedford’s thirty-some years at Jack Daniel’s was born out by the quality of this whiskey. (Rating ****)

Before our time together ended, Mr. Bedford mentioned that in addition to buying bottles of JD Single Barrel, folks could also purchase a whole barrel. For about $8500 you could stop by JD’s Distillery, and go into their storehouse to pick a barrel. The barrel would then be drained into about 240 fifth bottles, and shipped to you along with a customized sticker and a brass plaque and framed certificate of ownership. When I asked how many folks took advantage of this opportunity, Bedford smiled. “Well, so far we’ve sold about 600 barrels. We’ve even had some repeat customers.”

3 thoughts on “A Private Tasting with Jimmy Bedford, Master Distiller at Jack Daniel’s”