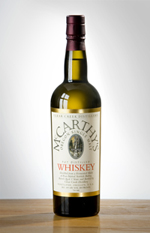 The American micro-distilling movement rolls on!

McCarthy’s is produced by Clear Creek Distillery of Portland, Oregon. This bottle (Batch W09-01, bottled August 3, 2009) was barrel-aged three years and weighs in at 93 proof. We were delighted to read the label’s declaration, “This whiskey was not cold stabilized and filtered prior to bottling.” The Scottish barley used to make this whiskey was fermented by Widmer Bros. Brewing Company.

This is a pretty robust Scotch-like whiskey. Its primary flavors are iodine and smoke, so lovers of Islay malts (like Ardbeg and Laphroaig) and perhaps Talisker might find this malt appealing.  We enjoyed it both neat and with an ice cube.  Bravo!  (Rating ****1/4)

For further information, surf to http://clearcreekdistillery.com/whiskey.html