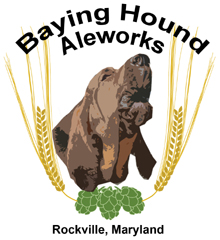 Microbrews have been all the rage in the beer world for a couple decades now. Of late, microbrewers have upped their game further.

In the past, I have highlighted beers from Flying Fish, Bayou Teche, Dogfish Head, and New Belgium to name a few. With the possible exception of Bayou Teche, which has a more limited distribution network, all of these breweries are craft brewers with a mostly nation-wide distribution network. While none of these breweries are as large as a Boston Beer Company(maker of Sam Adams), they are very big compared to Baying Hound Aleworks.  Baying Hound is a nano-brewery based outside of Washington, DC in Rockville, Maryland.

While they make several different beers, their distribution is limited. I was recently able to find two of their beers: the Pale Ale and Angel’s Nector.

Pale Ale
The Pale Ale is unfiltered and bottle conditioned with an almost red color reminiscent of an amber in the glass.  The nose has hops, honey, and maple.  On the palate it has caramel notes with a slightly bitter and malty finish. Overall and excellent balance. Comes in 12oz bottles, 5.5% alcohol. (Rating ****1/2)

Angel’s Nectar
A chamomile honey wheat beer that looks like a typical wheat beer with a cloudy, amber appearance in the glass.  The nose smells of chamomile and flowers and the beer tastes distinctively of honey and chamomile tea.  While the beer is well balanced, it is not for everyone.  I did not particularly enjoy the chamomile flavors, but my dinner companion loved the beer and took home the rest of the large-format bottle (1 pint, 6oz), 7% alcohol.  (Rating ***1/2)

After tasting these beers, I am looking forward to finding more and taking a tour of the brewery in the near future.