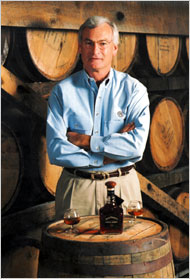 Some years back, I met Mr. Bedford for an interview at the Marriot Marquis Hotel in Manhattan. He was in town for a whiskey festival, and graciously gave this then young spirits writer a half hour of his time.

Bedford was the sixth master distiller at Jack Daniel’s. Like so many other whiskey-makers, he liked to say that his job was to ensure that his product stayed the same. Of course, things cannot stay the same. Equipment gets updated, the fermentables used to make the whiskey evolve, the product changes, sometimes for better, sometimes for worse.

While at the helm, Bedford ramped up production of Jack Daniel’s #7 and offered new whiskeys, such as Gentleman Jack. When he stepped down in 2008, the Lynchberg distillery was booming.