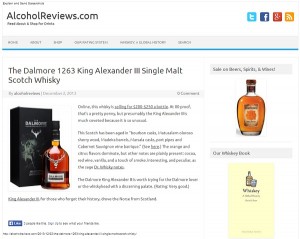 The year’s monthly unique visitors showed highest traffic (per normal) during the November-March period, when distilled spirits consumption tends to be highest:

AlcoholReviews.com does no advertising; AWStats indicates that readers continue to find AlcoholReviews.com overwhelming through search engines and keyword search. Most site visitors came from the United States, with Great Britain’s websurfers a distant second. The three most heavily trafficked posts were:

AlcoholReviews.com in 1998 by Kevin R. Kosar. He is the author of Whiskey: A Global History(London: Reaktion, 2010), and a contributor to the Oxford Encyclopedia of Food and Drink in America (2004). Kosar has served as a judge at the San Francisco World Spirits Competition, co-hosted “Vodka Festival” in New York City’s Grand Central Station, and won an Academy of Wine Communications’ wine writer award.