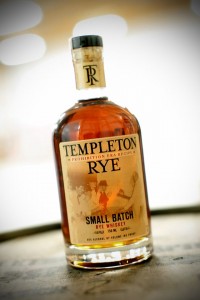 Say “whiskey” in America and the first state that comes to mind is Kentucky. This is not surprising, seeing as Kentucky has become synonymous with Bourbon, which has expertly advertised itself as “the spirit of America.”

The assumption that if it is whiskey then it is made in Kentucky is a fairly recent phenomenon. As we pointed out in Whiskey: A Global History, a century ago Kentucky lagged behind other states, including Indiana. And let us not forget that Bourbon can be made outside of Kentucky and it is.

And Indiana, believe it or not, is the state where Templeton Rye is distilled. Now that might confuse you, seeing as the Inter-Tubes is aflood with talk of Templeton, Iowa being the whiskey’s namesake. Which it is.  But Templeton Rye is produced by Lawrenceburg Distillers of Indiana.

Anyhoo, this 80 proof whiskey is aged 4 years in new charred oak barrels. It is a little mild, compared to some of the young, wild ryes out there. Templeton Rye offers caramel, toffee, and light black pepper notes. It is tasty, and we encourage you to enjoy it neat so as to appreciate the full range of flavors. (Rating: Very Good)

You may read more about Templeton Rye at http://www.templetonrye.com/. At present, it is distributed in a limited number of states.

Our preferred online retailer is selling it here.