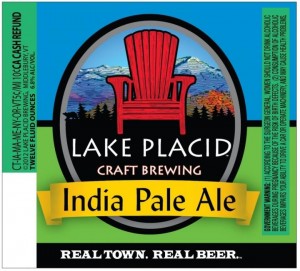 We happened upon this beer in East Hampton, New York. And when we say “happened” we mean it—there were four bottles left in a cupboard in the beach house we stayed in.

The bottle’s label boasts, “Real town. Real beer.” We smiled at this dig at the faux microbrews out there which are cranked out by big brewers but passed off as local creations. (Remember the Plank Road Brewery beers?)

But we were thrown for a loop when we saw it was made in Utica.  Huh?  Well, as this Adirondack Daily Enterprise article explains, this small brewer expanded production by outsourcing. Lake Placid Craft Brewing went from brewpub to brewing off-site 50 miles away to brewing at F.X. Matt’s in Utica (i.e., Saranac).  All of which rather attenuates this brew connection with Lake Placid.  (Utica is about 150 miles from Lake Placid.)

None which is to say the beer is no good. This India Pale Ale is quite good. The flavor is big but it is not a hop bomb.  It struck a very good balance between the sweet malt and bitter hops flavors, and it was delicious in balmy weather.  Pity it is only available in five states at the moment. (Rating ****1/4)