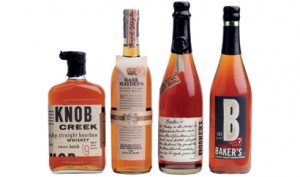 Attending an event hosted by the Kentucky Bourbon Circle (aka The Kentucky Springs Distilling Co. aka The Jim Beam family) is the whiskey fiend’s equivalent to attending a Business 101 class. The evening has a very instructional aspect to it, making sure that even the greenest whiskey virgin learns how to properly view, sniff, taste, and savor a whiskey properly. Hell they even broke out specially made bourbon glasses (reportedly the first of the kind) manufactured in Austria by Riedel Crystal specifically for the 2002 series of tastings the KBC was conducting.

Of course on hand to add a bit more entertainment value to the evening was Fred Noe, son of Booker Noe and great grandson of Jim Beam. Fred is a mountain of a human being who actually resembles Orson Welles in Touch of Evil. Noe is an interesting character with his tales of learning the business from the ground up by starting on the late shift at the distillery and the occasional story of Hank Williams Jr. getting so plowed he literally fell off a mountain. Stockbrokers, salesman, and lawyers all lined up to have Noe lead them through the tasting and answer questions on everything from whiskey’s classification as a “100% organic product” to how whiskey barrels are fired. Not exactly an event for the hardcore whiskey enthusiast, who already understands the finer points of bourbon production, but an excellent event for those who are more casual enthusiasts.

But I bring up Noe because the small batch bourbons we tasted that evening were crafted for the Kentuckian palette (especially Noe and his family). They are bred for a class of humans raised on the Kentucky Derby, mellow evenings spent sipping whiskey on the front porch and enjoying the occasional fistfight at the local bar. It is that interesting mix of raw edge and smoothness.

The two heavyweights of the quartet were Knob Creek and Booker’s. The former was already reviewed excellently by Colin Dodds previously. I won’t go any further except to say that Knob Creek has an amazingly long and strong finish to it. It has a stunning potency and smokiness that still smooths out with just a splash of tap water. Designed as a pre-prohibition whiskey, Knob Creek is very unique amongst these bourbons as it is aged longer to allow it time to absorb more sugar from the oak barrels.

Booker’s is Kentucky Spring Distilling’s masterpiece – developed by Booker Noe in the 1980s. At 121-127 proof it packs a wallop, yet much like Knob Creek, it is a Kentucky-bred whiskey – rough around the edges but smooth. Part of this is due to the bourbon being both uncut and unfiltered. It is both extremely sweet in aroma and taste; you can pick up vanilla and wood flavors lurking about. The taste is very full bodied and the finish is long and spicy (it seemed to last for about two weeks or so as I’m still tasting it while trying other whiskeys).

Compared to the two bourbons mentioned above, Basil Hayden’s and Baker’s seem designed for a much mellower palette. That’s not to say they are sub-standard, it’s just they have a less of a punch to them. Baker’s is very sweet and smooth with a cognac like flavor. It also boasts the strongest nose of the four bourbons partly due to its unique strain of jug yeast. Basil Hayden’s has a much spicier, almost peppery flavor, due to the higher concentration of barley and rye in its makeup. This also gives it a shorter finish and a lighter color.

While Knob Creek and Booker’s are both outstanding, Basil Hayden’s and Baker’s are decent bourbons, but not top notch when compared to the other two. However depending on the palette, one could feel the opposite. If you dig your bourbons strong or want the utmost quality, definitely reach for the Knob Creek or Bookers. If you want something mellower, take a chance on the Basil Hayden’s or Baker’s.

To see buy any or all of these whiskeys, click here and type “Baker’s” or “Knob Creek” or whichever in the search engine and click the magnifying glass image.