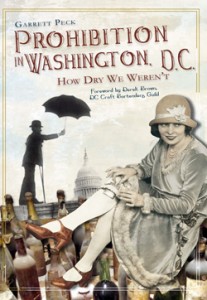 Not long ago we wrote well of Daniel Okrent’s book on Prohibition in The Weekly Standard.  For all its strengths, though, Okrent’s book is a bit much for your average reader—what with its more than 400 pages of text.

Peck previously wrote a bigger book on Prohibition and its repercussions, The Prohibition Hangover (Rutgers University Press, 2009).  So the man knows his stuff.  Yet, Peck’s prose is light and his tone amiable.  He is not interested in lecturing at you like a school marm.  Rather, he trots you through the debacle that Prohibition was. (No surprise there, seeing as Peck operates a Temperance walking tour.)

The subtitle of this new book says it all—“How Dry We Weren’t.”  A ward of the federal government, the Districtof Columbia  had Prohibition forced on it a couple years before the rest of the nation, and D.C. citizens resisted it mightily.  Speakeasies were  everywhere, and bootleggers had the run of the town.  Members of Congress voted dry but usually were wet.  One illicit booze salesman even set up shop in the halls of Congress.

We are tempted to say more, but we would rather not give away the story.  Suffice to say, the reader will come away amused, astonished, and greatly relieved that the days of Prohibition have long passed.

You can shop for a copy here.

1 thought on “Garrett Peck, Prohibition in Washington, D.C.: How Dry We Weren’t”