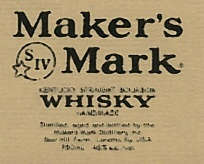 A few weeks back, we got a grumpy e-mail from a reader about a review we wrote about eight years ago (see below).  He groused that our 3.75 star rating was too high, that MAKER’S MARK tasted like “kerosene” and so forth.  The complaints were made so obstreperously that they were hard to take seriously.

None the less, we acquired a sample of MAKER’S MARK and decided to give it a sip. The result? This time around we noticed less vanilla and more menthol. For 90 proof, yes, this whisky is a little gassy. That’s not necessarily a damnable trait, provided one can add a little water and make it softer. One can; three ounces of MAKER’S MARK plus one ounce of water yields a pleasant whisky. As a judge might put it, “Petitioner’s claims lack merit; the appeal is dismissed.” (Rating ***1/2)

To see if our retailer can sell you a bottle of MAKER’S MARK, click here. Otherwise, check with the folks at http://www.MakersMark.com.

Our Original Maker’s Mark Review from 2000

Maker’s Mark is renown among those who do and don’t drink it because of its package. Each bottle is turned upside down and hand-dipped in red wax, which leaves the mouth and neck of each bottle uniquely coated and sealed.

Maker’s Mark is distilled from winter wheat, barley, and aged in charred white oak barrels. As Michael Jackson, the uber-sot puts it in his The World Guide to Whisky,

The defining smoothness is achieved, arguably, at the expense of some flavor because Maker’s Mark eschews rye in favor for wheat with which to season the palate. This is an accepted alternative way of producing bourbon but few distillers pursue it; Old Fitzgerald is a notable example.”

Furthermore, they use an old rollermill instead of the more modern and efficient hammermill to cook the grain because they feel it is less likely to scorch it and impart bitterness. They also toot that they don’t use a pressure cooker to speed up the process, instead preferring an open cooker which allows more aromatics from the air about to penetrate the mash.

Maker’s Mark is a not a single barrel whiskey; rather, they take different aged whiskys and mix them together aiming to accentuate the positive characteristics while masking the others. And oh yes, they spell it “whisky,” the scotch spelling, because they and their forebears are Scottish and that’s the way the Scots do it- just have a look at any bottle of Scotch if you don’t believe me.

Anyway, the taste is loaded with vanilla, and has a creaminess to it that has made it a huge hit among the business class and many others. Not long ago I coaxed a reticent friend of mine to try whiskey. For years I had egged on him to give it a whirl but he fought me terribly, insisting that whiskey was nasty stuff. One eve he gave in and asked what I would suggest for a neophyte. I indicated that either Elijah Craig, Early Times, or Maker’s Mark a try. He chose the latter, and has been a devotee ever since. And I myself would never turn down a glass. Never. (Rating ***3/4)

Want to have a bottle of Maker’s Mark delivered to your front door? Or maybe you’d like to send one to a friend? Then CLICK HERE!